For this Memorial Day, I want to share with everyone this awesome video I found in the public domain. It does a fantastic job of illustrating the debt of gratitude that we owe to those who have worn our Country's uniform in the past, and to those who wear it today.

My brother was in Vietnam for 1 year, he came back a total wreck, his 2 kids were born with severe birth defects. He tried to fight through it, but after his wife left him he attempted suicide, and then was in an institution for 2 years.
My parents took him in and we finally got him VA disability ($800 per month).
My Mom passed first and then my Dad a couple years later, me and my siblings each got about $2300 inheritance. Guess how much my Veteran brother got to keep? 0 + he was fined for not reporting it as income, that was another $500+.
I would estimate that over the years my parent's and myself spent more than $80K trying to help him.
Really a Fantastic Country we Live In, MY REAR END!

Thats horrible Falcon7!! He should be treated like royalty after fighting in that war, or any war for that matter.

This countries priorities are so messed up.

Returning Viet Nam vets were treated like dirt. It was members of my generation that went off to war. If you weren't fortunate enough to afford college (pre-Pell Grant era) then you were drafted right out of high school.

Many of the young men I went to school with never returned, and some that did come home were so damaged they took their own lives. The sights they saw in that conflict were unbearable.

Those vets are still suffering from the effects of the exposure to Agent Orange as well as PTSD. One of my cousins who was a Navy medic was able to function normally for years when he returned, but went on a downhill slide suddenly and was hospitalized for nearly a year with emotional issues. He later died of brain cancer that was directly linked to the exposure of chemicals used to defoliate the trees in the jungles of Viet Nam.

Another friend of mine had 4 children after he returned and married - the two oldest suffered from Moyamoya Syndrome, a brain disorder caused from the effects of Agent Orange. There are many support groups and forums that deal with this side effect. The eldest son died from it just before Thanksgiving last year.

I can go to my town cemetery and visit many of my old friends who lost their lives, and still are, due to the conflict that no one wants talk about.

My husbands step dad died of lung cancer 2 yrs ago caused by agent orange. he was a medic in vietnam. He had several brain tumors as well. he died a horrible painful death. The pain in his head was unbearable.

I'm surprised theres not really any war movies on this weekend. The only ones Ive seen on are Apocalypse Now Redux and Heartbreak Ridge. Both are good but I have seen them many times. I want to see Hamburger Hill or The Thin Red Line etc.

I just found this memorial day poem. Its called "Veteran" 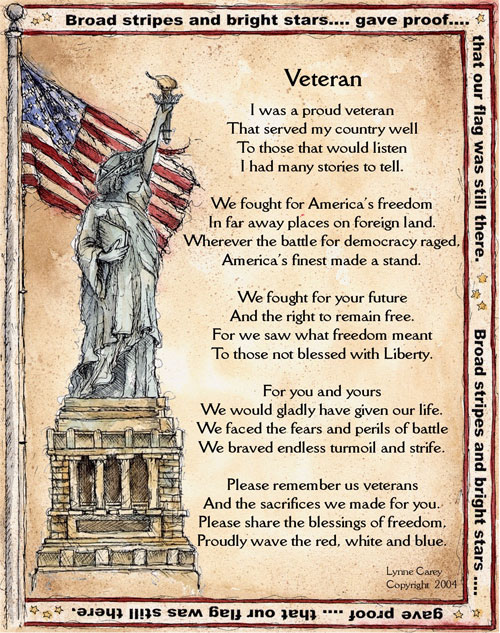 (Had to make it big in order to see the writing)

If anyone every has the opportunity to visit Washington DC, Arlington National Cemetery is a site you have to visit! Very emotional and a testament to all who have fought and died for our country.

Memorial Day Tribute to members of the United States Armed Forces who now rest in peace in Arlington National Cemetery - set to the song - "Arlington" by Trace Adkins - In honor of the Fallen Heroes of the US Army, Navy, Air Force, Marine Corps, Coast Guard, and Reserves. All gave some, some gave all. These are the men and women who bought our freedom at the price of their lives. We give thanks to those who made the ultimate sacrifice and pray for the loved ones they left behind.

Lyrics:
I never thought that this is where I'd settle down
I thought I'd die an old man back in my hometown
They gave me this plot of land,me and some other men, for a job well done
There's a big white house sits on a hill just up the road
The man inside he cried the day they brought me home
The folded up a flag and told my mom and dad
'We're pround of your son'

And I'm proud to be on this paecful piece of property
I'm on scared ground and I'm in the best of company
I'm thankful for those thankful for the things I've done
I can rest in peace, I'm one of the chosen ones, I made it to Arlington

I remember that my daddy brought me here when I was eight
We searched all day to find out where my granddad lay
And when we finally found that cross
He said, 'son this is what it cost to keep us free'
Now here I am a thousand stones away from him
He recongized me on the first day I came in
And it gave me a chill when he clicked his heels and saluted me

I'm proud to be on this peaceful piece of property
I'm on scared ground and in the best of company
I'm thankful for those thankful for the things I've done
I can rest in peace I'm one of the chosen ones, I made it to Arlington

He blesses the boys as they stand in line
The smell of gun grease
and the bayonets they shine
He's there to help them all that he can
To make them feel wanted he's a good holy man
Sky pilot,
Sky pilot,
How high can you fly?
You'll never, never, never reach the sky.

He smiles at the young soldiers
Tells them it's all right
He knows of their fear in the forthcoming fight
Soon there'll be blood and many will die
Mothers and fathers back home they will cry
Sky pilot,
Sky pilot,
How high can you fly?
You'll never, never, never reach the sky.

As the young men move out into the battle zone
He feels good, with God you're never alone
He feels tired and he lays on his bed
Hopes the men will find courage
in the words that he said
Sky pilot,
Sky pilot,
How high can you fly?
You'll never, never, never reach the sky.

You're soldiers of God, you must understand
The fate of your country is in your young hands
May God give you strength
Do your job real well
If it all was worth it
Only time it will tell

In the morning they return
With tears in their eyes
The stench of death drifts up to the skies
A soldier so ill looks at the sky pilot
Remembers the words
"Thou shalt not kill."
Sky pilot,
Sky pilot,
How high can you fly?
You'll never, never, never reach the sky.

Wishing all our Veterans and their families, those with us and those sadly who are not, God Bless You All. You are loved and appreciated.

Happy Memorial Day to All!

Desp, that is beautiful I am in tears, is that Dad. God Bless.

MaryKay wrote:Wishing all our Veterans and their families, those with us and those sadly who are not, God Bless You All. You are loved and appreciated.

Happy Memorial Day to All!

Desp, that is beautiful I am in tears, is that Dad. God Bless.

Yes, at his final resting place in Arlington.