I've got the job but there's a catch

I've got the job but there's a catch

Good news: They did make me an offer to go from temp to perm.
Bad news: It is contingent on a drug test, background check AND a credit check.

I don't know what's going to happen. Ten months ago I filed Chapter 7 bankruptcy. And I'm working in the accounting department. I was able to fend off bankruptcy for 6 months after I lost my job. Six months is a long time. Creditors calling the house from 8 o'clock in the morning until 8:59 at night. I didn't have a penny left to pay anybody.

I took a drug and alcohol test today. I'm not at all worried about that. This was the first time I've ever taken an alcohol test. It was just like Cops! The man held this little handheld device and I blew into this tube for 5 seconds and that was that. It came out 0.000 so I guess I passed. The drug test was run of the mill, pee in the cup deal.

I had to fill out an online background check. That took 40 minutes. Where have I lived for the past 10 years and where have I worked for the last 10 years. I got the addresses okay but the employment? um... my resume only goes back 8 years. I guessed on the last entry. I had to google all the addresses to every place I've ever worked. They only wanted my high school information. I thought that was a little odd. Again, I had to google the address.

All of the information will be back Tuesday; the drug testing as well as the background and credit check. Tuesday is when I will (or won't) do my new hire orientation. I'm getting a 97 cent an hour raise. After 90 days it goes up another $1.00 an hour. I'm eligible for a raise in 6 months. That is, if all goes well.

This whole thing almost seems too good to be true. I feel like I'm on a hidden camera. Like someone is dangling a carrot out there in front of me and will pull it away in the last second.

"HAHA She thinks she's going to land a good paying job! How stupid is she? Doesn't she know she'll never have a decent job again in her life? She filed bankruptcy. She's toast. She's history. Just because she's worked in accounting for the last 20 years means nothing! She filed bankruptcy! Doesn't she know she's supposed to be able to magically pay the mortgage and the car note and gas and the license plate fees and the utilities and the credit cards and the phone bill all on her unemployment check?! What? Food? She doesn't deserve to eat, she filed bankruptcy! Off to debtors prison with her!"

Today is Friday night. Sometime on Tuesday I will know my fate. I'll either have landed the job of my dreams or I'll be back in the unemployment line.

Is there a place on that long form that allows you to comment? I would state that the banko was related to running out of money job hunting in a bad economy, and not because of financial irresponsibility. 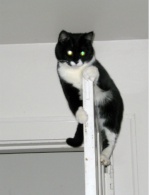 prayers going your way that you have GOOD news on
Tuesday

Good luck Marrer!! We are all praying for you

You are already temping there, correct? You already have your foot in the door, I think that is a good sign. They already know you and know the work you are capable of doing.

Hopefully they will see that your credit went down hill due to unemployment, not bad accounting. If they mention it, make sure you point that out. Tell them the only reason you had to file bankruptcy was because you were unemployed. Im sure they will go back far enough to see that. I have a good feeling that you will get it!!

They hired me! Outright! I'm in! I went to orientation! I got a benefits package today! Nobody asked me any uncomfortable questions about filing bankruptcy... and working in accounting. They just plain 'ol hired me!!

I HAVE A REAL JOB FOR THE FIRST TIME IN OVER A YEAR!![center][b]

It happened for me. It WILL happen for you. I really believe that all the good thoughts I got from the good folks on here helped me out / helped me actually land the job.

With the Utmost Sincerity,